Cobra Electronics power pack that can jump-start your car 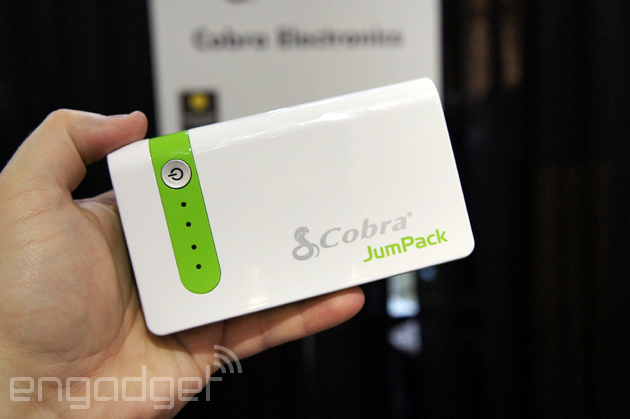 Cobra Electronics is a big player in the automotive world, largely thanks to its line of radar detectors. What a lot of people don't know, however, is that the company has also been dabbling with products that jump-start your car.


At this year's CES, Cobra is introducing the JumPack, which it says is a game-changing device for jump-starting -- an odd-sounding statement, no doubt, but we have to agree. The 7,500mAh portable JumPack (CPP 7500) looks suspiciously like your run-of-the-mill external smartphone/tablet charger, and it's the smallest jump-start power pack we've come across.


It features a 200A starting current and gets up to a peak current of 400A, which is enough to give your car's battery a few jumps -- given that it only takes three to four hours to recharge, it should be more than enough to manage those unfortunate situations in a lonely parking lot.


It also comes with a built-in flashlight as well as USB output (2.1A) in case you want to give your smartphone a power boost.


When it makes its way to stores in March or April, you'll be able to pick one up for $130.