- BERNAMA
Posted by BnW NewsWire at 8:08 pm No comments: BEIJING: At least 42 people died Friday when fire engulfed a bus in minutes during rush hour in the Chinese city of Xiamen, state media reported, the country's deadliest road accident in recent years.

Images on Internet news portals showed a burnt-out shell was all that remained of the vehicle, which caught fire in the city, in the southeastern province of Fujian, at about 6:30pm (1030 GMT), the official Xinhua news agency said, citing local officials.

Xinhua reported 42 fatalities and another 33 passengers injured in the blaze while the Fujian Daily newspaper said 48 people had died.

Some online reports said about 100 people were on the bus, which was on fire for 10 minutes before it was destroyed by a series of explosions.

Witnesses said ambulances took away "many" injured people from the site, Xinhua said. One passenger told the news agency that she had smelled gasoline before the blaze quickly engulfed the vehicle.

A local official said the bus caught fire 500 metres (yards) from the Jinshan bus stop, which appears to be in a residential area of the city.

The accident was under investigation, Xinhua added. China's roads are highly dangerous, with traffic laws and safety widely flouted.

Last August, at least 36 people died when a double-decker sleeper bus slammed into the rear of a methanol tanker and burst into flames, China's worst traffic accident in more than a year.

That accident, in northern Shaanxi province, was the deadliest since a fire on an overcrowded sleeper bus carrying flammable materials killed 41 passengers in central China in July in 2011, according to the country's work safety watchdog.

More recently, a fireworks-laden truck exploded as it crossed a bridge in central China in February, killing 26 people as the structure collapsed and vehicles plummeted to the ground.

Although accidents on China's popular urban bus network are less common, many buses are crowded with both standing and sitting passengers. KUALA LUMPUR: A portion of the still under-construction Second Penang Bridge collapsed at about 7pm on Thursday. The incident happened in the section aboveland at Batu Maung.

The following is the chronology of the incident and play-by-play recount of the search and rescue efforts by the Fire and Rescue Department over the past two days:

6.50 pm: A 30m stretch of an entry ramp leading to the Second Penang Bridge collapses

7.15 pm : The authorities receive the first reports of the collapse

9.05 pm: A Perodua Kelisa is confirmed to have been buried beneath the rubble. The number of trapped victims was still unacertained

9.30 pm: It was understood that two females in a Perodua Myvi nearly became victims but managed to escape with minor injuries

11.35 pm: The fire and rescue department confirms that one body was sighted

11.45 pm: Police denies earlier reports that four individuals had died from the incident

3.05 am : Operations to cut through the heavy concrete slab begins to reach to the victim(s)

5.30 am : Authorities still unable to remove the trapped body

8.00 am : Jambatan Kedua Sdn Bhd (JKSB) said that it will pay a compensation of RM10,000 to each person who were victims of the collapse

8.05 am : JKSB explains that the metal supports for the bridge is believed to be the cause of the collapse

12:10 pm: Police admits that the operation to extricate the body from the ruins was difficult

12.15 pm: Police announces that the victim can be removed latest by Friday night

2.00 pm : UEM Builders Bhd today explained that the company was not the main contractor for the Second Penang Bridge

2.10 pm : Police confirms the identity of the owner of the Perodua Kelisa crushed under the collapsed structure

5.00pm: Preliminary investigation by the Department of Occupational Safety and Health (DOSH) shows that the form work failure may have been the cause of the collapse

9.00 pm : Rescue team managed to pull the victim out from the rubbles after more than 24 hours of search and rescue operation.


- ASTRO AWANI
Posted by BnW NewsWire at 8:30 am No comments: KUALA LUMPUR: A vagrant escaped the gallows after the High Court here today acquitted and discharged him without calling for his defence for the murder of a Myanmar national two years ago.

Judge Amelia Tee Hong Geok Abdullah made the decision after finding that the prosecution had failed to establish a prima facie case against Mohd Abdul Aziz Ibrahim, 25.

In her judgment, Amelia said the prosecution's case rested primarily on the closed circuit television camera (CCTV) recording from Restoran Shukran, the place of the incident.

She said the court was not saying that in an appropriate case, where a CCTV recording clearly captured the commission of an offence and the identity of the perpetrator could clearly be identified, that there cannot be a finding of a prima facie case based solely on a CCTV recording.

"The court finds that without the evidence of the CCTV recording, the prosecution has failed to establish that it was the accused who had caused the death of the deceased," said Justice Amelia.

She said following this failure, there was no necessity for the court to consider whether the act was done with the intention to cause bodily injury to the deceased, and whether the bodily injury was sufficient, in the ordinary course of nature, to cause death.

Amelia said the prosecution had also failed to produce certificate to proof of the CCTV recording.

"Neither was there any oral evidence adduced from the prosecution witness, technician Zaidi Hanapi, to show that the CCTV recording was produced by a computer in the course of its ordinary use," she said.

She said without the evidence of the CCTV recording, the court was also unable to find a prima facie case made out on any lesser charge.

- BERNAMA
Posted by BnW NewsWire at 8:17 am No comments: 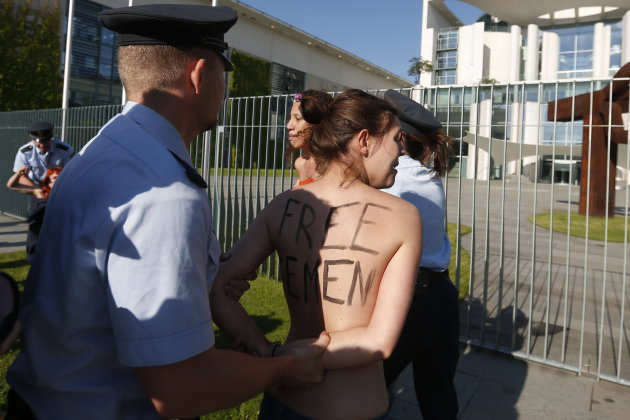 Activists from the women's movement Femen are being stopped by police officers during a protest in front of the German chancellery ahead of the visit of Tunisian Prime Minister Ali Laarayedh in Berlin, Friday, June 7, 2013. Three topless Femen protesters pleading for Angela Merkel to push for the release of four fellow activists jailed in Tunisia. The women chanted “Merkel free Femen” and two women had painted the names of the activists jailed in Tunisia across their bare chests. Three European Femen demonstrators were arrested last month in Tunis for demonstrating for the release of a Tunisian activist who faces possible charges of public indecency for posting topless photos of herself protesting for women’s rights. (AP Photo/Markus Schreiber)

BERLIN (AP) — Three topless protesters from feminist protest group Femen were dragged by police from outside the German chancellery Friday where they were pleading for Angela Merkel to push for the release of their fellow activists jailed in Tunisia.

The demonstration came ahead of Merkel's meeting in the building with Tunisian Premiere Ali Larayedh. The women chanted "Merkel free Femen" repeatedly before being removed.

After the two leaders met, Merkel told reporters that they had discussed the issue and that she had "made clear the hope for a fair and reasonable handling" of the situation.

Larayedh downplayed the incident, while saying that he considered "the proceedings so far to be just." "This incident must not be blown out of proportion," he said through a translator. "The rights of the youngsters are being protected."

Two of the protesters in Berlin had painted the names of the activists jailed in Tunisia across their bare chests, while the third had "Free Femen" on her stomach.

Police said the three were not arrested, but they are investigating possible charges of violating German public assembly laws. Police did not immediately have information on the protesters' nationality but said they were not German.

The women were demanding help for three Femen demonstrators — a German and two French women — who are on trial in Tunis for public indecency after demonstrating topless in front of Tunisia's Palace of Justice. It was the Ukraine-based group's first such protest in the Middle East.

The three activists were in turn calling for the release of a Tunisian member of the group, Amina Sboui. Sboui scandalized the country by posting topless photos of herself protesting for women's rights in March. She later attempted another protest May 19 in the religious center of Kairouan, where she was arrested.


Source: http://news.yahoo.com/berlin-police-break-topless-protest-144700268.html
Posted by BnW NewsWire at 8:07 am No comments: