World of Sport: Crocodile kills golfer as he tries to collect balls from lake 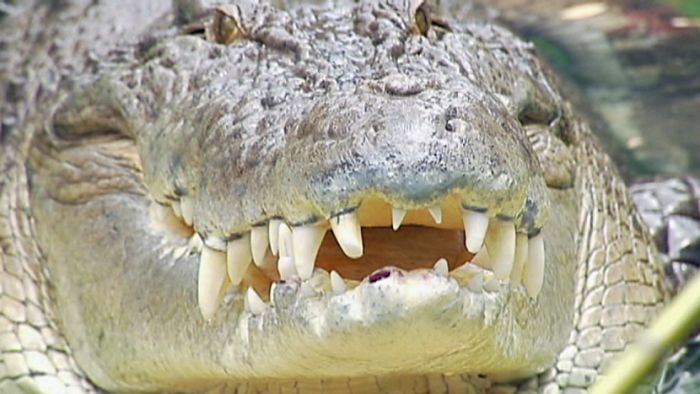 A South African golfer has been killed by a crocodile on the course at the country's biggest game reserve, Kruger National Park.

29-year-old Jacque van der Sandt was with friends retrieving golf balls from a lake when he was taken by the beast and dragged beneath the surface.

A two-hour search for the crocodile and his victim eventually turned up Van der Sandt, who had tooth marks on his front and back. The crocodile was also found, and was killed by park rangers.

The victim, the son of a park employee, was at a golf course next to a staff residential area on the world-famous reserve where he had grown up.

He was in waist-deep water searching for balls beneath the surface of Lake Panic, a stretch of water created by a dam across a river, at the time of the attack

"One guy challenged the other to see who can retrieve the most golf balls," police officer Oubaas Coetzer told AP.

Coetzer added that the victim's mother works at the park, and his father had done so until his retirement. Van der Sandt was described as a "keen golfer who grew up in the park" and who had seen crocodiles in the area in the past.

- Source: Eurosport
Posted by BnW NewsWire at 1:34 pm No comments:

James Bond returns to his roots to face 'Spectre' Shooting will start on Monday and is due to take around seven months. - AFP Photo

LONDRES: Mr Bond, we've been expecting you. Fans got a glimpse of what awaits in the new James Bond film "Spectre" Thursday, raising hopes that it could revive one of the most iconic Bond villains, Blofeld.

During a presentation at Pinewood Studios outside London, director Sam Mendes revealed that, as well as Daniel Craig in his fourth adventure as 007, it would star double Oscar winner Christoph Waltz plus Monica Bellucci and Lea Seydoux.

"A cryptic message from Bond's past sends him on a trail to uncover a sinister organisation," a brief plot summary released at the event revealed.

"While M battles political forces to keep the secret service alive, Bond peels back the layers of deceit to reveal the terrible truth behind SPECTRE."

That, plus the unveiling of the new Bond car, an Aston Martin DB10, suggests that "Spectre", the franchise's 24th film, will stick to the winning Bond formula of stunts, seduction and exotic locations.

Shooting will start on Monday and is due to take around seven months.

Bellucci, an Italian actress seen in the "Matrix" trilogy, said Bond represented "the ideal man -- the man who's a protector and generous, but at the same time mysterious, dangerous, sexy".

Seydoux, a French actress acclaimed for her role in lesbian coming-of-age drama "Blue is the Warmest Colour", suggested her character could embody an evolution in the portrayal of Bond girls.

"She needs to be sexy, she's strong, she's tough -- but I think that now she's more sensitive. She's more vulnerable," she told AFP.

It was the possibility that Waltz, known for playing villains in movies like "Inglourious Basterds", could play Blofeld that got diehard Bond fans most excited.

The Austrian actor brushed away questions about the precise nature of his role when questioned by journalists.

"Everybody's seen the Bond movies from childhood on. It's legend. It's practically modern mythology. To participate in that, come on, you don't have to think, you just do it," he said.

He is confirmed to play a character called Oberhausen who, in Ian Fleming's original James Bond books, taught Bond to ski and climb while he was a schoolboy.

But the prospect of SPECTRE without Blofeld is unthinkable for many Bond fans and Waltz would be a strong contender to take on the role.

"For the next year or so, Waltz and everyone involved with SPECTRE will have to field endless 'You're Blofeld really, aren't you?' questions," British movie magazine Empire wrote in its report on the launch.

Blofeld has not featured in an official Bond film since 1981's "For Your Eyes Only" due to a legal rights dispute which was only resolved last year.

The SPECTRE acronym stands for "Special Executive for Counter-Intelligence, Terrorism, Revenge and Extortion" and the conspiracy's symbol is an octopus.

The movie will be shot at Pinewood and on location in London, Mexico City, Rome, Tangiers and Morocco's oasis town of Erfoud, plus in several mountain locations in Austria.

Actors returning for the latest movie include Ralph Fiennes, promoted to spy chief M, and Ben Whishaw, who played the Secret Service's technological whiz-kid, both introduced in the last film "Skyfall".

Andrew Scott, best known as the villain Moriarty in the BBC's "Sherlock" television series, is also in, along with Filipino-American wrestler and actor Dave Bautista.

Craig, who has signed on for a total five Bond films, told the BBC he had only "read the script this morning" for "Spectre".

Bond has been one of the highest-earning film series ever. "Skyfall" took over $1.1 billion (1.3 billion euros, $1.7 billion) worldwide.

While Thursday's event revealed the cast, it did not name who will perform the final key part of any Bond film -- its theme song.

British bookmaker William Hill put two British singers, Sam Smith and Ed Sheeran, as the favourites, with odds of 4/1 and 6/1 respectively. Lana del Rey, Rita Ora and One Direction trailed behind at 8/1.

- Source: AFP
Posted by BnW NewsWire at 1:13 pm No comments:

UK court finds drinking while pregnant is not a crime The ruling centred on whether a foetus can be considered a person under English law.

LONDON: A British court on Thursday ruled that heavy drinking during pregnancy should not be considered a "crime of violence" against the child in a case that had raised concerns about criminalising mothers.

The case was brought by a local authority applying to the government's criminal compensation authority for damages on behalf of a seven-year-old girl in its care who has severe disabilities after her mother drank heavily while pregnant.

"We have held that a mother who is pregnant and who drinks to excess... is not guilty of a criminal offence under our law if her child is subsequently born damaged as a result," the ruling said.

The local authority's lawyers had argued that the mother was "reckless" in her behaviour by drinking up to half a bottle of vodka and eight cans of strong lager a day while she was pregnant.

While they do not suggest the damage was deliberate, they say she discussed her drinking with professionals and "went on to take the risk".

The ruling centred on whether a foetus can be considered a person under English law.

The case has sparked heated debate over the dangers of alcohol and the rights of women and foetuses in a country where abortion has been legal since 1967.

While there was no suggestion of charges against the mother, women's rights groups had warned that it risked opening the door to police action against other pregnant women with alcohol problems.

Ann Furedi, head of the British Pregnancy Advisory Service, and Rebecca Schiller, co-chair of Birthrights, hailed the decision saying: "This is an extremely important ruling for women everywhere.

"The UK's highest courts have recognised that women must be able to make their own decisions about their pregnancies," they said in a joint statement.

The Court of Appeal judgement caps a five-year legal battle between the council and the Criminal Injuries Compensation Authority (CICA).

The CICA considers applications for damages involving behaviour that could constitute a crime, in this case the alleged reckless administration of a noxious substance to the foetus.

The girl, known only as CP, has a severe form of foetal alcohol spectrum disorder (FASD), an umbrella term which covers a range of disorders varying from reduced intellectual ability to heart and kidney problems. - Sumber: Bernama
Posted by BnW NewsWire at 10:47 am No comments:

- Sumber: Astro Publication
Posted by BnW NewsWire at 8:01 am No comments: - Sumber: Astro Awani
Posted by BnW NewsWire at 6:54 am No comments: