Part of the group gathered outside the Jinjang lockup.

KUALA LUMPUR: PKR vice-president Tian Chua, PAS member Tamrin Ghafar and Anything But Umno head Haris Ibrahim have been released from police custody after the Magistrate rejected the police's application for remand.
Earlier, about 100 people gathered outside the Jinjang lockup to protest the detention of the three opposition figures.
The gathering took place at the barricade put up about 50m from the entrance to the lockup, with people holding placards and shouting slogans.
Bersih 2.0 co-chair Datuk Ambiga Sreenevasan and Selangor exco member Elizabeth Wong were among those seen.
The three were detained on Thursday in connection with alleged seditious statements made during a forum on May 13 held at the Kuala Lumpur and Selangor Chinese Assembly Hall.
It was reported that during the forum, several pro-Pakatan groups including the trio, had called for massive street rallies to topple the Government.
Lawyers N Surendran, R Sivarasa, among others, represented the three men.

Posted by BnW NewsWire at 4:27 pm No comments: I've been arrested at LCCT about 5min ago, just b4 the security check. Now in police vehicle being transported to Balai Polis Jinjang.
— Tian Chua (@tianchua) May 23, 2013 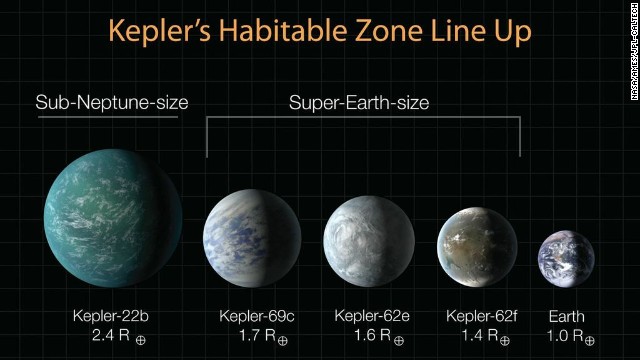 This diagram lines up planets recently discovered by Kepler in terms of their sizes, compared to Earth. Kepler-22b was announced in December 2011; the three Super-Earths were announced April 18, 2013. All of them could potentially host life, but we do not yet know anything definitive about their compositions or atmosphere.


Kepler or not, we'll find life in space - Meg Urry

(CNN) -- On Wednesday, NASA officials announced a serious problem with the Kepler satellite, the world's most successful planet-finding machine.

Since its launch four years ago, Kepler has found more than 2,700 possible planets orbiting stars other than our Sun, of which more than 100 have been confirmed. A few of these exoplanets resemble the Earth in size or mass. Recently, three Earth-like planets were even reported to be in the habitable zone: close enough to the star they orbit that water is liquid, yet not so close that it is boiling. Planets with liquid water may well harbor life.

Now, the second of four of the Kepler spacecraft's reaction wheels, which aim the vessel's instruments, appears to have failed. It remains to be seen whether full repairs are possible. For the spacecraft to point accurately, at least three reaction wheels are needed, corresponding to the three dimensions (up-down, north-south, east-west). The fourth wheel serves as a backup and provides cross-comparisons of data among the wheels. The first wheel failed last summer; now Kepler has too few reaction wheels to keep pointing with sufficient stability.

When a major component like a thruster fails on any spacecraft, operations software points the craft's solar panels toward the sun to ensure a continuous power supply. Power is a satellite's lifeblood: Lose it and you lose communications, so the satellite can't be oriented properly or take data. Backup batteries allow the solar panels to be misdirected for a few hours or so, before all power is lost. But batteries drain quickly, so engineers design software to make sure that when something goes wrong, the spacecraft points in a direction that preserves power.

Source: http://edition.cnn.com/2013/05/20/opinion/urry-kepler-malfunction/index.html?iid=article_sidebar
Posted by BnW NewsWire at 12:13 am No comments: