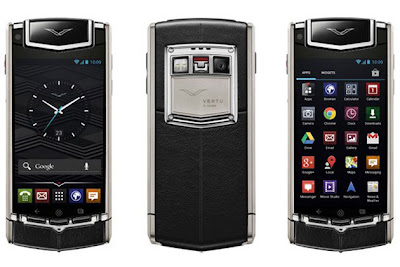 Email ThisBlogThis!Share to TwitterShare to FacebookShare to Pinterest
Labels: Gadget, Weird and Rare 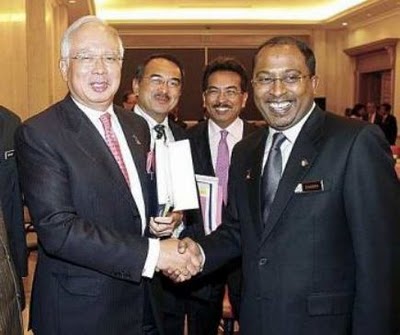 Posted by BnW NewsWire at 8:00 pm No comments: 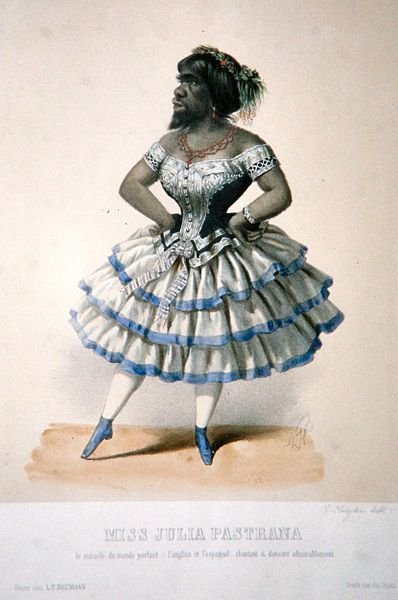 Julia Pastrana was born in Mexico in 1834. Photo source

MEXICO CITY (Reuters) - The "ugliest woman in the world" was buried in her native northern Mexico on Tuesday, more than 150 years after her death and a tragic life spent exhibited as a freak of nature at circuses around the world.

Born in Mexico in 1834, Julia Pastrana suffered from hypertrichosis and gingival hyperplasia, diseases that gave her copious facial hair and a thick-set jaw. These features led to her being called a "bear woman" or "ape woman".

During the mid-1850s, Pastrana met Theodore Lent, a U.S. impresario who toured the singing and dancing Pastrana at freak shows across the United States and Europe before marrying her.

In 1860, Pastrana died in Moscow after giving birth to Lent's son, who inherited his mother's condition. The son died a few days later, and Lent then toured with the mother and son's embalmed remains. After changing hands over the ensuing decades, both bodies ended up at the University of Oslo in Norway.

"Imagine the aggression and cruelty of humankind she had to face, and how she overcame it. It's a very dignified story," said Mario Lopez, the governor of Sinaloa state who lobbied to have her remains repatriated to her home state for burial.

"When I heard about this Sinaloan woman, I said, there's no way she can be left locked away in a warehouse somewhere," he said.

Crowds flocked to the small town of Sinaloa de Leyva on Tuesday to pay their respects to Pastrana, who was buried in a white coffin garlanded with white roses.

"The mass was beautiful," said New York-based Mexican artist Laura Anderson Barbata, who has led a nearly decade-long campaign to have Pastrana returned to Mexico for a proper Catholic burial. "I was very moved. In all these years I've never felt so full of different emotions." (Reporting by Gabriel Stargardter; Editing by Simon Gardner and Christopher Wilson)


Source: Reuters
Posted by BnW NewsWire at 5:00 pm No comments:

Look what's happening around us. The world is getting old! 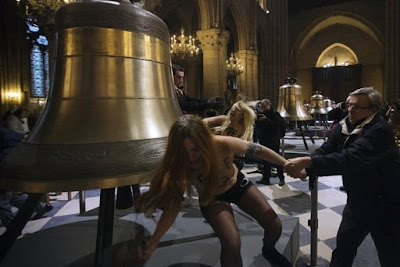 The members of the Femen movement entered the Gothic cathedral dressed in long coats which they whipped off inside while ringing three bells near the altar.

"Pope no more!" they cried. "No more homophobe" and "Bye bye Benedict!"

"This is a sacred place, you can't strip here," said a Frenchwoman.

The Femen women's power group has been making headlines since 2010 for topless feminist, pro-democracy and anti-corruption protests in Russia, Ukraine and London. The protestors were dragged out of the cathedral by security but remained outside for some time shouting "In gay we trust" and "Get out homophobe."

French Interior Minister Manuel Valls and Paris Mayor Bertrand Delanoe condemned the action. Calling it a "useless provocation," Valls expressed his "support to French Catholics who could have been offended by this rude gesture."

Delanoe expressed his "sadness" over what happened.

"I reprove an action which caricatures the fine struggle for female-male equality and needlessly shocks many believers," Delanoe said.


Source: AFP via Yahoonews
Posted by BnW NewsWire at 3:15 pm No comments:

Be careful with what you do.

Eyes and ears are everywhere, even if you don't believe that God is watching you. 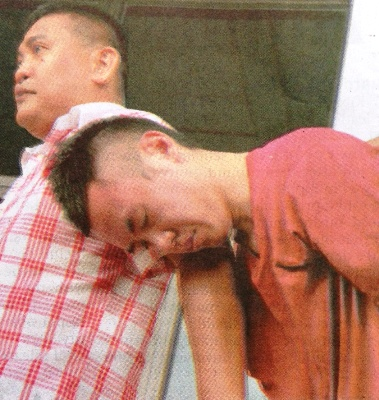 Leong being taken away after the sentencing, Wednesday


BALIK PULAU: A quantity surveyor was sentenced to a month's jail and fined RM8,000 by the Magistrate's Court here today after he pleaded guilty to two counts of flashing obscene hand gestures in public last Monday.

On the first count, Leong Pei Koe, 29, was charged with flashing the obscene hand gesture to the Raja Permaisuri Agong Tuanku Hajah Haminah while the car carrying her was passing the departure hall of the Bayan Lepas International Airport near here at 11.50am last Feb 11, 2013.

He was also charged with showing the obscene hand gesture to a policeman, ASP Mohamad Fakhrudin Abdul Hamid, at the same place, time and date.

Both the charges were made under Section 294 (a) of the Penal Code which provides an imprisonment for up to three months or fine or both, upon conviction.

Leong was sentenced to seven days' jail and fined RM2,000, in default a month's jail, on the second count.
The court ordered Leong to serve the jail sentences concurrently from the date of his arrest on Feb 11. When handing down the sentence, Muhamad Hidayat said he took into consideration Leong's guilty plea and aplogy, as well as public interest.

Earlier in mitigation, Leong, who was unrepresented, apologised for committing the offense. Prosecution was conducted by deputy public prosecutor Suhaimi Ibrahim. -- Bernama


Source: Bernama through Malaysiandiagest.
Posted by BnW NewsWire at 1:21 pm No comments:

Have you ever ride a giant wheel, the Singapore Flyer, the Eye of Malaysia, the Ferris Wheel? Yeah, that's the wheel we are talking about here. Click on Google front/landing page today and you'll be told that today is the birthday of George Ferris, the creator of the Ferris Wheel.

Ferris was born on February 14, 1859 which happens to be the world famous Valentine's Day.  So, let's dedicate a little bit of blog space to him this day.

He is most famous for creating the original Ferris Wheel for the 1893 Chicago World's Columbian Exposition (wikipedia). 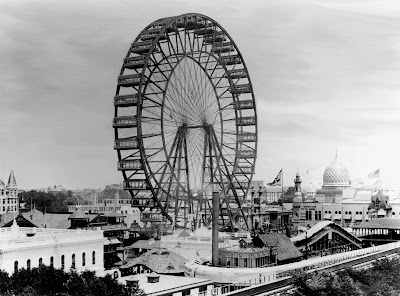 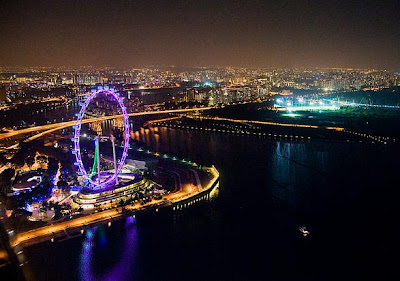 The famous Singapore Flyer (Ferris Wheel) in the city state of Singapore. Source


There is always place for people who have been kind to others and who become the source of inspiration for others. George Ferris died in 1896, but his piece of work would remain to be enjoyed by people of many many generations.


Sources: as per links given
Posted by BnW NewsWire at 9:48 am 1 comment: