At long last, Mercedes-Benz Malaysia’s new range of SUVs are finally in town, and it starts with this, the Mercedes-Benz GLC 250 4Matic. Just one variant of the five-seat SUV we’ve previously spied in the country has been launched, with a price tag of RM328,888.

The X205 GLC joins its larger GLE and GLE Coupe here, positioned as the smallest of the three new SUVs. It is the successor to the Mercedes-Benz GLK-Class SUV which was never sold in Malaysia because a right-hand drive model was never considered.

Now with a RHD version to boast, the GLC gets its revised name from its commonalities with the C-Class. A lot of this SUV’s styling, inside and out, has been lifted right off the popular sedan – a point which you’ll notice (if you haven’t already) mostly from its similar interior design. While the BMW X3 is the only locally-produced model in its class here, we understand that Mercedes-Benz Malaysia does have some plans to locally-assemble its GLC SUV at a later point in time.

The front end gets a dual-bar grille with a centralised three-pointed star, flanked by LED Intelligent Light System headlamps. Full LED tail lights are present at the rear, with dual exhaust tip finishers signing off on the rear. Inside, the GLC’s cabin is unsurprisingly a carbon-copy of what’s seen in the current W205 C-Class. An AMG interior styling package has been specified as standard, including Artico leather upholstery, open-pore black ash wood dashboard trim and the AMG flat-bottomed three-spoke multi-function steering wheel.

An Audio 20 CD infotainment system is standard fare, dictating the inclusion of a seven-inch free-standing display screen positioned as the dashboard’s centrepiece. Similar to the local-spec C-Class, the GLC gets a Garmin Map Pilot navigation system integrated into its operating software as standard, while views for the 360-degree camera are also displayed on the seven-inch screen.

The GLC has a 40/20/40 split-folding rear bench to balance between maximising cargo and seating space. The backrest can also be tilted forwards to create more cargo space, but in its regular upright position, the GLC has 580 litres of space behind the rear seats.

With the seats folded flat, a total of 1,600 litres of space becomes available. To make loading cargo easier, MBM has specified an Easy-Pack Tailgate system with Hands Free Access. This generally translates into being able to swipe your foot under the rear bumper (with the key fob in your pocket) to open the tailgate. There is also a switch on the inside of the tailgate and on the dash to open and close the tailgate as well.

The GLC comes equipped with a load of premium active and passive safety features. Collision Prevention Assist Plus, Crosswind Assist, Attention Assist and an Active Parking Assistant are all included as standard. Additionally, the car is fitted with a newly-developed window airbag that extends over both seat rows and the side and knee airbags.

The GLC also marks the first application of the brand’s new 9G-Tronic nine-speed torque converter automatic transmission in Malaysia. Similarly, the GLE and GLE Coupe are also be equipped with the new unit.

The multi-clutch 4Matic all-wheel drive system distributes 33% of the engine’s torque to the front wheels and the remaining 67% of torque to the rear wheels. Traction is optimised by the 4Matic system incorporating functions from the ESP and Anti-Skid Regulation. - Source: paultan.org
Posted by BnW NewsWire at 6:33 pm No comments:

The new 2016 Proton Saga, the third in the national carmaker’s three-strong sedan offensive after the Perdana and Persona, has been spotted on the road again, by readers Encik Ray and Antony Beecham.

As with the previous set of spyshots, it’s clear here that the new budget sedan will still be based on the current Saga, as can be seen through the similar front end shape, upright windscreen rake, front door cutouts and wing mirrors. 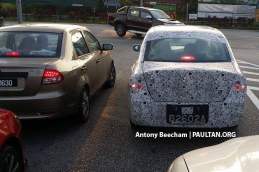 However, several major revisions to the exterior can be found at the rear, seen more clearly here – the rear door features a prominent C-pillar kink that differs from the current car’s straight slope, while the door handles are new and look like they come from the Iriz. The rear end has also been completely revised with a sleeker, more streamlined design.

Expect the new Saga to come with the Iriz’s 1.3 and 1.6 litre VVT engines, mated to either a five-speed manual or a CVT. Added equipment, particularly in terms of safety, should also make their way into the new car – although quite what level of kit we should expect from Proton’s sub-RM40k entry level sedan remains to be seen.

- Source: paultan.org
Posted by BnW NewsWire at 11:52 am No comments:

- Sumber: BH Online
Posted by BnW NewsWire at 11:26 am No comments:

-- Sumber: Astro Awani
Posted by BnW NewsWire at 11:12 am No comments: