PETALING JAYA:  A ‘technical error’ in the identification process on two policemen who were allegedly involved in a snatch theft incident in Kelana Jaya last month had caused the delay in the case to be brought or charged in court.

“I can’t elaborate further  what kind of ‘technical error’ that had occurred  because investigation is still on-going but we are trying to get other statements from witnesses to assist and support the existing evidence in our probe,” he told reporters at Petaling Jaya district headquarters.

It is learnt that the ‘technical error’ was the two policemen the victim had positively identified were not the actual snatch thieves involved in the accident and the real thieves are still at large.

Arjunaidi clarified the duo were not arrested but only asked to attend the identification parade process.

“The duo are police constables and still in active duty. However they are not attached to any district police station here or state police headquarters,” said Arjunaidi.

So far, police have taken statements from more than 10 people with regards to the case but have yet to trace the woman involved in the jewellery snatch incident. The case is being investigated as a robbery.

On July 3, about noon, technician Saravanan was in his car when he saw two men on a motorcycle snatching a woman’s necklace near his office at Taman Mayang in Kelana Jaya.

He then immediately rammed towards the motorcycle which caused the duo to fall. One of them fled from the scene on foot while his accomplice tried to escape using the motorcycle.

Saravanan had then rammed toward the motorcycle again but the thief reacted by throwing stones at him, causing damage to the windscreen.

The suspects armed with a knife then attacked him in a brief scuffle. The thief, however manage to snatch his necklace before escaping.

Saravanan did not chase the suspect. A police patrol car came later and assisted him.

From the chassis number inspection, it was confirmed that the motorcycle belonged to a police officer.

The motorcycle was using a fake registration number. -- Astro Awani
Posted by BnW NewsWire at 10:12 pm No comments:

Email ThisBlogThis!Share to TwitterShare to FacebookShare to Pinterest
Labels: In the News, My Malaysia, Why and How 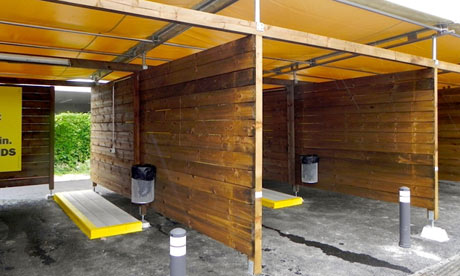 The publicly funded facilities will include bathrooms, lockers, small cafe tables and a laundry and shower. Photograph: John Heilprin/AP

Zurich has launched a novel experiment to make prostitution safer: publicly funded drive-in "sex boxes".
The teak-coloured wooden garages will be open for business from Monday for drive-in customers in a country where prostitution has been legal since 1942 on the outskirts of the Swiss city.
The several dozen sex workers who are expected to use them can stand along a short road in a small, circular park where they can negotiate with clients. The park was built in a former industrial area between a rail yard and the fence along a major highway.
The publicly funded facilities – away from the city centre and open all night – include bathrooms, lockers, small cafe tables, a laundry and shower.
Men won't have to worry about video surveillance cameras, but the sex workers – who will need a permit and pay tax – will have a panic button and access to on-site social workers trained to look after them. 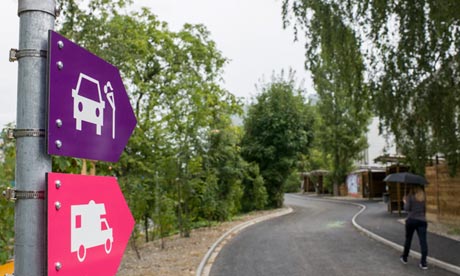 Voters in Zurich approved the project as a way of moving sex traffic away from a busy downtown area where it had become a public nuisance and safety concern. Photograph: Ennio Leanza/AP

Daniel Hartmann, a Zurich lawyer, welcomed the new facility, saying: "Safety for the prostitutes. At least, it's a certain kind of a shelter for them. They can do their business, and I respect them."
He added: "They do a great job, and they have better working conditions here … They're not exposed to the bosses, to the pimps, in here."
But others are not so sure. Brigitta Hanselmann, a retired special needs schoolteacher from Embrach, north of the city, said: "I have to think about it for a long time, because it's so incredible that a city offers that to the men, and it's interesting that there are many, many women here who are looking at it." She called the sex boxes an effort to control something that you could not really control. Prostitution has been legal in Switzerlandsince 1942. 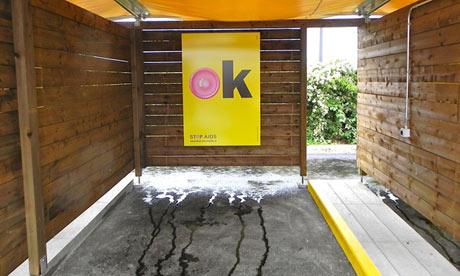 The sex boxes will have a panic button and on-site social workers trained to look after them. Photograph: John Heilprin/AP

Voters in Zurich approved spending up to SFr2.4m ($2.6m) on the project last year as a way of moving away from a downtown area where it had become a public nuisance and because of safety concerns over a lack of sanitation, aggressive men and associated drugs and violence. The city, which only allows prostitution in certain areas, also plans to spend SFr700,000 a year to keep the sex boxes running.
Jean-Marc Hensch, a business executive who heads a neighbourhood association in another part of Zurich, hoped the boxes succeeded because of concerns that the sex worker might return to his area. He also cited the lack of sanitation in other city areas where prostitutes and their clients defecated and urinated in the streets and in gardens, or had sex in the open because they had nowhere else to go.
"It's an experiment," he said, of the sex boxes. "It was absolutely urgent to find a solution."
The drive-in sheds have no doors to shut and come equipped with an emergency call button on the passenger side of the structure that sets off a flashing light and an alarm inside an adjacent office building where the city will post social workers specially trained to provide a measure of security. The Zurich police say they will increase patrols around the perimeter of the facility to protect the sex workers when they leave and enter. 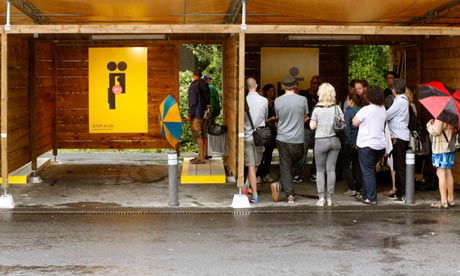 Modelled after drive-in brothels used in Germany and the  Netherlands,the sex boxes will be open daily from 7pm to 5am. Photograph: Arnd Wiegmann/Reuters

The city has painted the outdoor bathrooms in soft pink and blue, strung colourful light bulbs among the trees and posted creative signs encouraging the use of condoms to spruce the place up a little and make it seem more pleasant.

Source
Posted by BnW NewsWire at 10:03 pm No comments: The Shared Album feature was to be introduced slowly, first becoming available to a small group of English-language users before gradually spreading across the social network.

"A shared album is an album that multiple people can upload photos to," Facebook said in an online post explaining the new feature.

"When you make an album shared, you can add your friends as contributors," the post continued. "This allows them to add, view and edit photos in the album."

Previously, Facebook members could only add photos to their own online albums at the social network.

The new feature, inspired by feedback from Facebook users, is intended to let friends or family members collaborate on photo albums memorializing shared events or occasions.

Facebook members can invite as many as 50 friends to contribute digital photos to online albums.

Privacy settings allow sharing of albums to be limited to those who contribute or opened to friends of contributors or the public, according to Facebook. - AFP
Posted by BnW NewsWire at 9:22 pm No comments:

Email ThisBlogThis!Share to TwitterShare to FacebookShare to Pinterest
Labels: Consumerism, Gadget and Techonology Email ThisBlogThis!Share to TwitterShare to FacebookShare to Pinterest
Labels: My Malaysia, Politics - BERNAMA
Posted by BnW NewsWire at 8:04 pm No comments: - BERNAMA
Posted by BnW NewsWire at 7:48 pm No comments: Email ThisBlogThis!Share to TwitterShare to FacebookShare to Pinterest
Labels: In the News, My Malaysia

- Astro Awani
Posted by BnW NewsWire at 8:15 am No comments: - BERNAMA
Posted by BnW NewsWire at 8:05 am No comments:

- BERNAMA
Posted by BnW NewsWire at 6:32 am No comments: