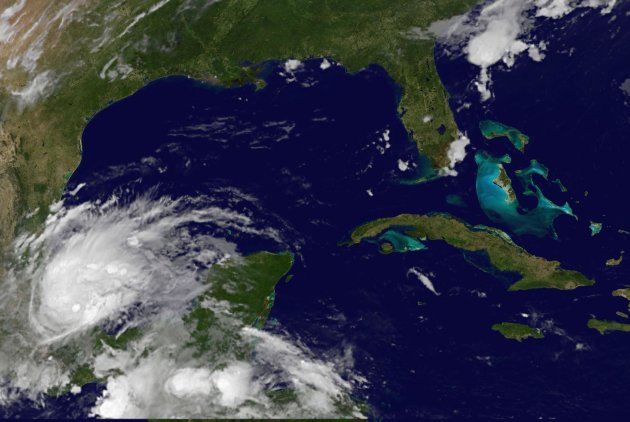 This image provided by NOAA shows Tropical Storm Barry taken at 4:45 a.m. EDT Thursday June 20, 2013. The U.S. National Hurricane Center said the storm was about 30 miles (45 kilometers) north of the port city of Veracruz early Thursday and heading west at 5 mph (7 kph). Barry, which has sustained 45-mph (75-kph) winds, is expected to make landfall northwest of that city. (AP Photo/NOAA)

MIAMI (AP) — Tropical Storm Barry has made landfall in Mexico, threatening deadly flash floods and mudslides as it moves inland.

The U.S. National Hurricane Center in Miami says Barry made landfall Thursday morning. It was forecast to continue moving west over land for the next day or so before weakening and losing its tropical characteristics.

The second tropical storm of the Atlantic season had sustained winds at about 40 mph (65 kph) late Thursday morning. It was moving west at about 5 mph (7 kph).

A tropical storm warning was in effect from Punta El Lagarto to Tuxpan, in Veracruz state. However, the major concern was heavy rain that could create floods and mudslides, especially in mountain areas.

THIS IS A BREAKING NEWS UPDATE. Check back soon for further information. AP's earlier story is below.

In Miami, the U.S. National Hurricane Center said the storm was about 30 miles (45 kilometers) northwest of Veracruz at 8 a.m. EDT Thursday and heading west at 3 mph (5 kph) toward expected landfall.

"It's very close to the coast," Hurricane Specialist Lixion Avila told The Associated Press, adding a small forward part of the system had begun brushing close to land while most of the vast system was still out over the Gulf of Mexico.

He said the ill-defined tropical storm would be making landfall sometime later Thursday morning, slowly coming ashore over the course of hours.

Between 3 to 5 inches of rain were possible with up to 10 inches in some areas, the hurricane center said. Avila warned the rains could trigger life-threatening flash floods and mudslides, especially over mountains.