A one-hour freak storm caused roofs to fly off and uprooted a few trees!

A freak storm occured at Jalan Pasir putih around 4.30pm which had cause a havoc in Ipoh city.

IPOH: A one-hour freak storm caused roofs to fly off and uprooted a few trees that damaged power cables but, so far, no one was reported to have been injured.

Zinc roof on houses and shops around city centre and residential areas here were blown off.

The storm, which happened at about 4.15pm Tuesday, had affected at least eight houses in Kampung Baru Pasir Pinji and Hoover Park.

A few trees in the two housing areas had also been uprooted by the strong wind, with some damaging the power cables.

"TNB sent technicians to visit the affected areas and carry out remedial works," he said. "We will be discussing with the welfare department to see how we can help the affected residents to fix their roofs," he said.

Meanwhile, on Jalan Leong Boon Swee and Jalan Yang Kalsom, several signboards and awnings installed outside the shophouses had collapsed.

A witness, who only wished to be known Chong, said he did not expect a freak storm to happen though he noticed that Ipoh had been experiencing heavy rain in the evenings for the past three days.

Chong, 35, said some of the roof tiles on his hardware shop were blown off.

"The broken tiles are scattered all over the road. I hope the pieces did not hurt anyone or scratch vehicles that passed by," he said. 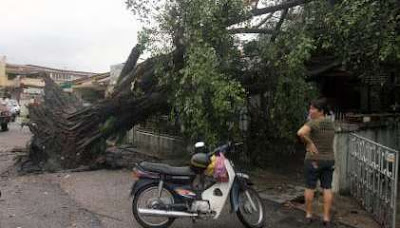 
Source: The Star
Posted by BnW NewsWire at 11:42 pm No comments: