My First Home Loan scheme and PR1MA not working Calling these initiatives ‘way off the mark’, Kluang MP Liew Chin Tong suggested instead that the government to consider a "semi-rental or shared equity" model.

“What the government has done is not working and won’t work because firstly, people still have low income, and housing prices remain to be so high,” said Liew.

Liew explained that his proposal for a semi-rental model involves having families renting a house for a number of years first and the Government later allows for the house to be bought.

“The rent that has already been paid will then be converted to the installment for buying the house. This is already being done for People’s Housing Programme(PPR) low cost houses,” he said.

Asked if he was suggesting that the Government focus more on middle income group at the expense of lower income groups, Liew said that the problems with PPR revolves around maintanence and quality.

"The problem of numbers doesn't arise with PPR low cost housing, but the number of young families being able to afford buying a house is a real issue," he said.

Liew said that his second suggestion of having shared equity model, on the other hand, involves the Government owning a percentage of the houses. He said that the My First Home Loan scheme and PR1MA does not work for 80% of Malaysians who earn less than RM3,000 a month.

“The impracticability of the My First Home Loan Scheme (SRP) demonstrates how out of touch the Barisan Nasional government is with the economic realities faced by average Malaysians living in the no-buy zone,” he said.

Liew highlighted the fact that since the loan scheme was first announced in the 2011 budget, only 485 loans have been approved. Out of 1,410 applications.

“This hardly makes a dent in the statistics of Malaysians who cannot afford to purchase property with the skyrocketing prices particularly in urban areas,” he said.

“On paper, this sounds like a good solution to ease the house-hunting dilemma of young working adults. In fact, calculations will show that the figures are too good to be true for young, middle income, families,” he said.

- Astro Awani
Posted by BnW NewsWire at 11:19 pm No comments: KUALA LUMPUR: The Education Ministry has promised to investigate claims of temporary teachers not getting the bonuses as promised in Budget 2013.

Deputy Education Minister II P. Kamalanathan said that Kulai MP Teo Nie Ching, who brought up the issue in a press conference this morning, can pass him the details for him to check.

“I will check, if she passes me the details I will check for her,” said Kamalanathan, although he admitted that he was unsure if there has been “a lot” of such cases.

Earlier today, Teo highlighted the cases of three temporary teachers who claimed to have yet to receive a single sen despite the Government announcing a one-and-a-half months bonus for teachers during Budget 2013.

Teo had claimed that “thousands” of temporary teachers in her constituency were facing the same problem.

The three teachers, from Sekolah Jenis Kebangsaan Cina Senai, were supposed to receive the bonus, on December 2012, January 2013 and Hari Raya this year.

However, they have not gotten anything, with the Education department officers giving no reason for the delay except asking the teachers to “just wait”.

According to a circular on the bonuses, those eligible for the bonus included those who worked full time, temporary and also contract officers.

Those eligible would get a month-and-a-half of bonus or RM1,500, whichever was higher


-Astro Awani
Posted by BnW NewsWire at 10:56 pm No comments:


- BERNAMA
Posted by BnW NewsWire at 6:56 pm No comments:

With more than 13 million cars sold in China last year, motor vehicles and their emissions have emerged as the chief culprit for the air pollution in large cities.

Four cities, including Beijing and Shanghai, already curb the purchase of vehicles for private use, through lotteries and auctions of a limited number of license plates.

Shi Jianhua, the deputy secretary general of the government-backed China Association of Automobile Manufacturers, was quoted Thursday as saying that eight more cities are likely to announce similar policies. The eight include the port city Tianjin, near Beijing, the metropolis Chongqing in the southwest and industrial powerhouse Shenzhen, not far from Hong Kong.

Such restrictions might cut vehicle sales by 400,000 units, or 2 percent of total domestic sales, and have a "certain impact" on the country's economic growth, the China Daily newspaper quoted Shi as saying.

The China Association of Automobile Manufacturers, which consults with local governments and makes recommendations on vehicle policies, declined to offer details when called.

China's increasingly informed and vocal citizens have successfully pushed the government to be more transparent about how bad the air in their cities is, but, as they get richer, their desire for cleaner air conflicts with their growing dependence on cars. While China is the biggest car market in the world by number of vehicles sold, there is still plenty of room for growth as the country still lags far behind developed markets in terms of the ratio of cars to people.

The number of vehicles in Beijing has increased to 5.18 million from 3.13 million in early 2008, Xinhua reported earlier this year. Since the beginning of last year, prospective buyers have had to enter a monthly draw to win a license plate. Each month, 20,000 lucky winners are chosen. The number of people in the draw had reached almost 1.53 million by last month.

Zhao Jian, a transport expert at Beijing's Jiaotong University's School of Economics and Management said extending restriction-on-ownership policies to other cities was unlikely to have much effect on pollution because there were already too many cars on the roads.

"Even with proper enforcement, the policy still won't solve the air pollution problem, neither will similar measures in other cities."

Vehicle emissions are compounded by a lack of effective public transportation, low emission standards and the slow development of energy-saving and clean automobile technologies, the Asian Development Bank said in in its 2012 environmental analysis of China.


Source
Posted by BnW NewsWire at 6:36 pm No comments:

A shard of pottery unearthed near the Temple Mount in Jerusalem bears an inscription that dates to the 10th century B.C. The inscription is the oldest alphabetic text found in Jerusalem and predates the earliest found Hebrew inscription in the region by 250 years. 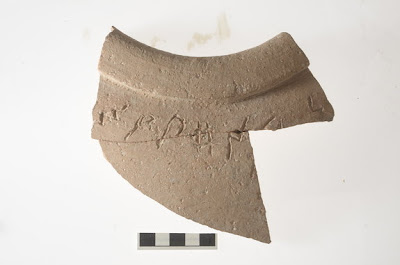 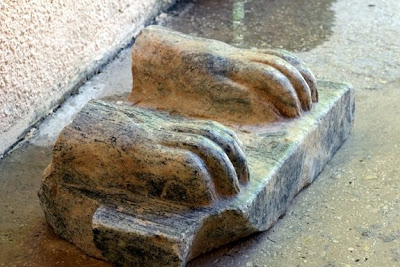 The enigmatic letters, which wrap around the top of a neck-less ceramic jar, were written around the time of King David or King Solomon's reign in an early form of Canaanite, not Hebrew. As a result, archaeologists believe a Jebusite or some other non-Israelite tribe member wrote the inscription.

At that time, the Israelites hadn't yet conquered the region, and Hebrew was not the dominant language of the day.

The findings are published in the current issue of the Israel Exploration Journal.

The area around Jerusalem is teeming with archaeological relics. An 11th century B.C. temple found near Jerusalem reveals evidence of fighting between Canaanites, Israelites and Philistines. And an ancient royal garden in the hills above Jerusalem was recently revived. In addition, an ancient seal depicting a man fighting a lion and possibly referencing the Biblical tale of Samson was discovered at Beth Shemesh, an archaeological site about 12 miles (20 kilometers) west of Jerusalem. That seal dates to the 12th century B.C., and was described last year by Tel Aviv University archaeologists.

The pottery was found underneath the second floor of a 10th-century B.C. building near the southern wall of the Temple Mount. The ceramics were probably used as fill for the building.

The fragment was found along with pieces of six other jars of its type. The writing, which included letters about 1 inch (2.5 centimeters) tall, was inscribed into the jar before it was fired, and all the pottery pieces were likely made from clay that originated in the hills around Jerusalem.

However, the ceramic shard has just the tail end and the very beginning of the inscription left, just seven letters in all, and the meaning of those letters remains a mystery. The combination of phonetic letters has no meaning in any known languages of the region. The archaeologists suspect the inscription bears the name of the owner or the contents of the jar.

This excavation and others at the site, which is a national park open to the public, involve the Israel Antiquities Authority, the Israel Nature and Parks Authority, and the East Jerusalem Development Company.


Source
Posted by BnW NewsWire at 1:59 pm No comments:

Email ThisBlogThis!Share to TwitterShare to FacebookShare to Pinterest
Labels: In the News, Science, Weird and Rare SAC Mazlan (left) and the forensic police team conducting their investigations in the area.


GEORGE TOWN: A 30-year-old man was gunned down while walking to his motorcycle after buying himself a packedthosai meal from a coffeeshop in Relau here.

State CID chief Senior Asst Comm Mazlan Kesah said the victim, from Taman Damai in Taiping, was hit at least five times when he tried to flee from his assailant who had pulled out a revolver.

“Our initial investigations showed that Kugineswaran has a police record related to a drug offence,” said SAC Mazlan.

“We will also check with our counterparts in Taiping about his record.”

Kugineswaran’s body was sent to the Penang Hospital mortuary for a post-mortem. The case was being investigated under Section 302 of the Penal Code for murder.

Earlier last month, there was reportedly a gang clash at another coffeeshop nearby.

The area is said to be notorious for triad as well as vice activities.


SOURCE
Posted by BnW NewsWire at 12:10 am No comments: