BANGKOK: Thailand's coup leader received royal endorsement to lead the politically divided kingdom Monday and quickly issued a stark warning that he would brook no further opposition to his takeover following a weekend of angry protests.

In his first press conference as junta head, army chief Prayut Chan-O-Cha said elections would be held as "soon as possible" but that he had no timetable for returning the nation of 67 million people to civilian rule after seizing power last Thursday.

The top general said his military junta would move firmly to prevent any recurrence of the months of protests and political violence that have plagued the kingdom.

He urged protesters "to stop their actions as it will harm them and their families because the law is now strict."

The tough-talking commander-in-chief has curbed civil liberties and restricted the media, imposed a nightly curfew and abrogated most of the constitution. He also has assumed all authority to make laws.

Television footage showed Prayut, standing to attention in the crisp white dress required for royal occasions, as the palace proclamation was read out.

He then knelt down before a full-size portrait of King Bhumibol Adulyadej during the ceremony at army headquarters in Bangkok.

The 86-year-old monarch, who was not present, lives at his seaside palace in the coastal town of Hua Hin and rarely speaks in public nowadays.

Bhumibol commands great respect among many Thais, and his blessing is traditionally a key step in legitimising the country's recurring military takeovers.

The latest coup has triggered a small but growing backlash with more than 1,000 demonstrators marching through Bangkok on Sunday.

Scuffles broke out and at least two protesters were taken away by troops, one bleeding.

Prayut said demonstrators could be tried in tough military courts, and warned against social media postings that "create conflict".

The junta has detained former premier Yingluck Shinawatra along with about 200 ousted government leaders, political figures, critics and academics in a sweeping roundup since the coup, which has drawn sharp international criticism.

An army commander on Monday indicated Yingluck remained under military control, but declined to reveal her whereabouts.

"We are taking care of her. She is fine. She can choose to stay wherever she wants," Lieutenant General Thirachai Nakwanich, central region army commander, told AFP when asked of Yingluck's fate.

"Her living conditions are fine."

Yingluck was ousted by a court ruling earlier this month, but her embattled government had remained in place under a caretaker premier until the coup.

Asked when elections would be held, Prayut said: "I have no fixed timeframe."

"I have not set it yet. It depends on the situation. As soon as possible," he said, before abruptly ending the brief media conference.

The political turmoil centres on the divisive figure of Thaksin Shinawatra, Yingluck's elder brother who was deposed as prime minister by royalist generals in a 2006 coup and now lives in self-exile to avoid prison for a corruption conviction.

Thaksin or his allies have won a string of election victories, with strong support from the working class and rural communities in the north and northeast.

But he is reviled by a military-backed royalist establishment, Bangkok middle class and southerners who see him as corrupt and a threat to the monarchy.

The current tumult began late last year when anti-Thaksin forces launched a protest campaign in Bangkok calling for the ouster of Yingluck's government and eradication of her brother's political dominance.

At least 28 people have died in related violence.

While most Thaksin supporters detained since the coup were believed still in custody, authorities on Monday released rival protest leader Suthep Thaugsuban, who faces charges of insurrection for the anti-Thaksin pressure campaign.

Suthep also faces a murder charge for a bloody military crackdown on pro-Thaksin opposition protests in 2010, when he was deputy premier in a previous government.

Political analysts believe a new constitution will be introduced by the junta, featuring measures intended to weaken Thaksin's power base.

Some experts believe a struggle is unfolding to decide who will be in power when the revered king's more than six-decade reign eventually ends.

The succession issue cannot be openly discussed in Thailand because of strict royal defamation laws.
Posted by BnW NewsWire at 6:44 pm No comments: Posted by BnW NewsWire at 6:33 pm No comments: - Astro Awani
Posted by BnW NewsWire at 6:24 pm No comments:

- Sinar Harian
Posted by BnW NewsWire at 4:23 pm No comments:

- Sinar Harian
Posted by BnW NewsWire at 3:38 pm No comments:

- Sinar Harian
Posted by BnW NewsWire at 3:31 pm No comments:


Gareth Bale scored in extra-time as Real Madrid came from behind to beat Atletico Madrid 4-1 and claim a 10th Champions League.

The Welsh forward nodded in a rebound at the far post to put Carlo Ancelotti's side in the driving seat after Sergio Ramos' last-gasp equaliser had cancelled out Diego Godin's opener.

Atletico had overcome the early loss of talismanic frontman Diego Costa, who departed after just nine minutes after a recurrence of his much-talked about hamstring injury, to move within a whisker of their first ever Champions League title.

But Real recovered and rubbed salt in their wounds late on as Marcelo drilled in from distance before Cristiano Ronaldo netted a penalty at the death to claim La Decima.

TALKING POINT: What a season for Gareth Bale! The Welshman was out of sorts at times tonight but was in the right place to get the all-important second goal for Real and set them on their way to glory. The former Spurs man has fully justified Real's outlay on him with a winner in the Copa del Rey final and now a big hand in the holy grail that is 'La Decima'.

MAN OF THE MATCH

Sergio Ramos (Real Madrid): The defender embodies the spirit of Real Madrid and would not let their La Decima dream die. He was the hero in the semi-final against Bayern and stepped up to the plate with a crucial last-gasp equaliser that gave his side the platform to go on and secure glory in extra-time.

Source: Eurosport
Posted by BnW NewsWire at 1:50 pm No comments: 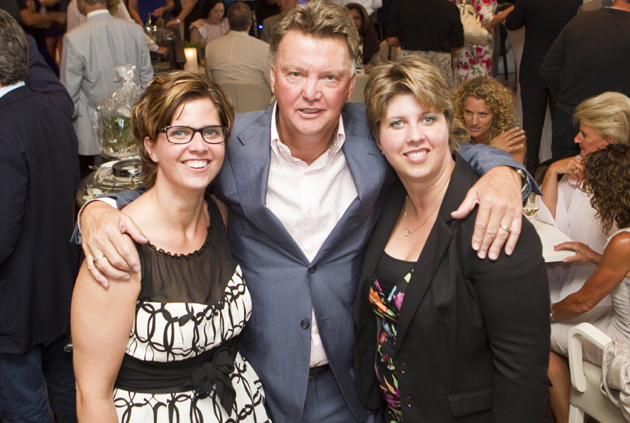 Louis van Gaal's daughter has told Manchester United fans not to bother bugging her on Twitter with messages for her father.

Brenda van Gaal has been bombarded with tweets from supporters since the Dutchman was appointed as David Moyes' replacement with people passing on everything from good luck messages to transfer tips.

The Netherlands coach is not on Twitter, but his daughter is, and she's told fans they are wasting their time getting in touch with her.

Brenda is unlikely to be swayed either, given the disciplined upbringing she has got from her father.

In a recent profile on van Gaal, the Guardian's Barney Ronay revealed: "There are two forms of the word 'you' in Dutch, the familiar and the formal. At home Van Gaal has always insisted his two daughters use the formal version when addressing him, even in private."

Van Gaal was handed a three-year contract with United earlier this month and will begin work at the club once he is finished guiding Holland through the upcoming World Cup in Brazil.
- Eurosport
Posted by BnW NewsWire at 1:01 pm No comments: