Exactly how this experiment can benefit mankind, I don't know but this is just for the sake of reading: 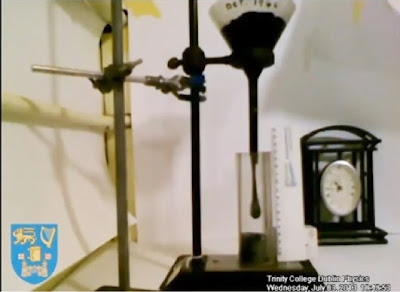 The second-longest running science experiment in history has just yielded its strange result: a sticky, black drop of pitch.

Set up in 1944 at Trinity College Dublin, the experiment is meant to reveal the strange properties of bitumen -- pitch, or asphalt -- which appears solid at room temperature but is in fact flowing very, very slowly.

At around 5 o'clock in the afternoon on July 11, 2013, physicist Shane Bergin and colleagues recorded what Nature described as one of the most eagerly anticipated and exhilarating drips in science.

“We were all so excited,” Bergin told Nature. “It’s been such a great talking point, with colleagues eager to investigate the mechanics of the break, and the viscosity of the pitch.”

The Trinity College team estimates the pitch to be about 2 million times more viscous than honey, or 20 billion times the viscosity of water.

The origin of the experiment is lost in history, although a similar experiment at the University of Queensland in Brisbane, set up in 1927, is tagged by Guinness World Records as the world’s longest running lab experiment.


Source: TGM
Posted by BnW NewsWire at 8:54 am No comments:

Email ThisBlogThis!Share to TwitterShare to FacebookShare to Pinterest
Labels: Science, Weird and Rare - BERNAMA
Posted by BnW NewsWire at 8:21 am No comments: Sumber: BERNAMA
Posted by BnW NewsWire at 7:59 am No comments: Tun Dr Mahathir Mohamad today suggested that Malaysia Airlines (MAS) be privatised in an effort to revitalise the government-linked company, and consequently, overcome its losses at present.

The former Prime Minister said privatisation is a good step for MAS to generate big profits as when a company is government-owned, it faces constraints from the point of finance.

"MAS has been in operation for a long time and many initiatives have been undertaken to turn it around, but unsuccessfully.

"I believe privatisation is a good thing, as when the company is government owned, it has also less rights," he told reporters at his Hari Raya open house in Seri Kembangan, near here.

The event was attended by about 20,000 visitors of various races as well as foreigners.

Dr Mahathir, who is also Proton advisor, said based on experience with the national car maker, privatisation will make the owners more sensitive as to the issue of profit and loss, as they are footing all expenditure.

"Through privatisation, when you lose money, the people who own it, have to pay out. But if it's government money, nobody cares. I know this because I have run the government company before," he added.

Source: BERNAMA
Posted by BnW NewsWire at 6:36 am No comments: The five-year-old girl who is believed to have been abused by her parents is reported in critical condition and relying on the life support system at the Paediatric Intensive Care Unit of the Raja Permaisuri Bainun Hospital (HRPB) here.

"The doctor's report on the child's condition is not encouraging because she suffered several injuries," she told reporters after visiting the girl.

She said the girl had an older brother, aged eight, and also a two-year-old brother and they were now placed under the care of the Kuala Kangsar Social Welfare Department pending investigation on their parents.

The girl was sent to the hospital by a family member last Friday and following a medical examination, found that there were wounds on her face, head and body, believed to have been inflicted with a cane.

A 39-year-old man and a 30-year-old woman from Menglembu had been detained for investigation into the case.

Sumber: BERNAMA
Posted by BnW NewsWire at 12:33 am No comments: