The red tide phenomenon is here to stay for a while so be careful with what seafood you are consuming! 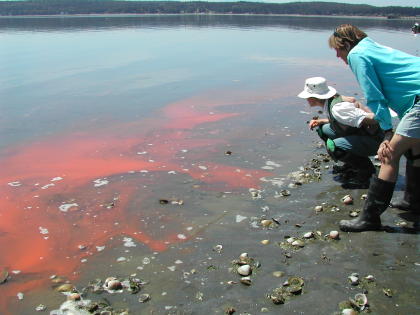 Kota Kinabalu: The red tide situation is expected to persist until June and the toxin levels will peak around March, according to State Fisheries Department Director Rayner Stuel Galid. He advised people to refrain from consuming any type of shellfish or bivalves immediately including oysters, mussels, cockles and any type of seafood with shells.

"In addition, people should refrain from collecting shellfish and bivalves from the sea areas with the intention to eat these or to sell to the general public as food," he said.

He said the mouse bioassay is the method for analysis of red tide toxin in shellfish by the Fisheries Department at its Fisheries Research Centre in Likas.

"Results are given as Mouse Unit (MU), where 400 MU is considered the lowest limit as the dangerous level for humans.

He said red tide occurrences in Sabah in past years have revealed bivalves to be as toxic as 11,000 MU.

On another note, he said, only the Fisheries Department can detect the presence of this toxin in shellfish in its specialised lab; lay people cannot tell whether clams are toxic or not through sight, smell or taste.

"The toxin in these shellfish also cannot be washed away or got rid off through washing or through any type of food preparation or cooking," he added.

Meanwhile, State Health Director Dr Christina Rundi advised that the early symptoms of shellfish poisoning due to red tide include tingling of the lips and tongue, which may begin within minutes of eating poisonous shellfish or may take an hour or two to develop.

She said depending upon the amount of toxin a person has ingested, symptoms may progress to a sensation of "pricking of pins and needles" of the skin and then loss of control of arms and legs, followed by difficulty in breathing.

"If one experiences any of the above symptoms, get medical treatment immediately at the nearest hospital or clinic," she said, adding that delay in seeking treatment may result in death.

She said the type of sea life which are considered safe to eat are all types of prawns and crabs including shovel-nosed lobsters, mantis shrimps, all types of coral fishes and fishes which are predatory such as sharks and sting rays, barracuda, tenggeri, jacks and deep sea fishes.

However as a prudent measure, she said, consumers are advised to throw away the guts and gills of any fish to be eaten and these same fishes are to be washed properly.

"Also, any type of dried, canned, bottled or salted fish products are safe to be eaten," she added.