TAIPEI:  A female giant panda donated by China to Taiwan four years ago gave birth to a cub on Saturday after being artificially inseminated, the Taipei city government said.

Yuan Yuan and her partner Tuan Tuan have become star attractions in Taipei Zoo in the island's capital since their arrival from China in late 2008 amid improving ties between the two sides.

But after years of hoping for a natural pregnancy, which are rare in captivity, the zoo carried out three artificial insemination sessions in March and announced in late June that Yuan Yuan showed signs of pregnancy.

The city government said it will share the happy news with a panda base in China's southwestern Sichuan province where the couple came from.

The island will be allowed to keep the cub as the panda couple is a gift, not a loan by China, Taipei officials have said.

Beijing usually only loans its pandas and any progeny must be sent to China.

China's decision to give Tuan Tuan and Yuan Yuan to Taiwan was a symbolic gesture to show warming ties between the former arch enemies, governed separately since the end of a civil war in 1949.

Fewer than 1,600 pandas remain in the wild, mainly in Sichuan province, with around 300 in captivity around the world. 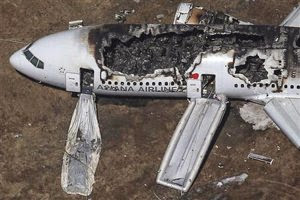 SEOUL (Reuters) - Asiana Airlines, the South Korean carrier whose Boeing 777 crashed while landing at San Francisco airport on Saturday, had been trying to clean up a tarnished safety record that included two other fatal crashes in its 25-year history.

One of the pilots of flight 214, Lee Jeong-min, is a veteran who has spent his career at Asiana. He was among four pilots on the plane who rotated in two-person shifts during the 10 hour-plus flight, a senior Asiana official told Reuters.

"The pilot's name is Lee Jeong-min, and (he is) a veteran pilot with long experience," said the official, who requested anonymity. "Our investigation committee is looking into the accident in San Francisco," he said.

He declined to give any other details about the flight crew, pending an investigation into the crash.

South Korea's Transport Ministry said in a statement the aircraft's fuselage appeared to have hit the ground, sending the plane off the runway and causing massive damage to the body of the jet.

Asiana, South Korea's junior carrier, is a member of the Star Alliance with 91 international passenger routes, 28 cargo and 14 domestic routes. It operates a fleet of 80 aircraft.

Two years ago, one of its 747 cargo jets bound for Shanghai crashed into the sea off Korea's Jeju island after taking off from Incheon airport. Two pilots on board were killed in the crash, which was blamed on mechanical problems.

In 1993, an Asiana domestic flight from Seoul crashed in driving wind and extremely poor visibility in a botched landing attempt, killing 66 people and injuring 44.

An inquiry found pilot error was the cause of that crash when the plane began a descent while it was still passing over a mountain peak.

Asiana was founded in 1988 by the Kumho Asiana transport and construction conglomerate at a time when South Korea wanted to boost its international appeal as an emerging economic power.

It launched its first international route two years later with flights to Tokyo and Hong Kong, then added flights to Southeast Asia and Los Angeles the following year, gradually expanding destinations to Europe and the Americas.

Asiana has been serving only six U.S. cities and four in Europe, compared with the 21 routes it flies to Japan and more than 30 to China.


(C) REUTERS via Yahoo News
Posted by BnW NewsWire at 12:43 pm No comments: