What would you do when you see sea of pig in the river near you?

The number of dead pigs found in a river running through China’s commercial hub Shanghai has reached more than 13,000, state media said, as mystery deepened over the hogs’ precise origin.

Shanghai had pulled 9,460 pigs out of the Huangpu river, which supplies 22 per cent of the city’s drinking water, since the infestation began earlier this month, the Shanghai Daily reported.

Shanghai has blamed farmers in Jiaxing in neighbouring Zhejiang province for dumping pigs which died of disease into the river upstream, where the official Xinhua news agency said another 3,601 dead animals had been recovered so far. The Jiaxing government has said the area is not the sole source of the carcasses, adding it had found only one producer that could be held responsible.

Shanghai said it had checked farms in its southwestern district of Songjiang, where the pigs were first detected, but found they were not to blame, the Shanghai Daily said.

The scandal has spotlighted China’s troubles with food safety, adding the country’s most popular meat to a growing list of food items rocked by controversy.

Samples of the dead pigs have tested positive for porcine circovirus, a common swine disease that does not affect humans.

Cockroaches have been crawling on the planet since before the time of the dinosaurs, and today there are more than 4,500 species known to science. Researchers are adding three more to that list.

Though they fall into the giant cockroach family (Blaberidae) these newly found, yellow-bodied creatures are small compared with some of their cousins — they grow just a little more than an inch (3 centimeters) in length in adulthood, compared with Blaberus giganteus, for example, which can reach lengths of 4 inches (10 cm).

The recently discovered insects are the first of the genus Pseudophoraspism to be found in China, researchers say. Until now, cockroaches of that genus had only been documented in Southeast Asia, never north of Vietnam.

"We found three new species from China, located in Hainan, Yunnan and Guangxi Provinces respectively, which extends the range of the genus Pseudophoraspis northward," entomologist Zongqing Wang, of China's Southwest University, said in a statement.

Posted by BnW NewsWire at 8:55 pm No comments:

This is set to be the tallest building in southern hemisphere, but South Africa’s Centurion Symbio City, a 447 metre tower will take the throne when it is built by 2018. 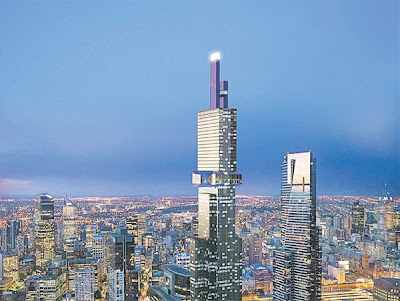 
MELBOURNE: Australia’s second-largest city Melbourne could possibly have the tallest building in the southern hemisphere after approval yesterday for a new 388-metre apartment and hotel complex.

The Victorian state government said Australia 108 would become the world’s 19th tallest building on completion and would be “an outstanding addition to Melbourne’s skyline”.

“I am proud to approve a tower that will define our city for many years to come,” Planning Minister Matthew Guy said.

There were some concerns that the construction of the 108-storey tower in the city’s Southbank area, expected to be ready in five years, would cast a shadow over the Shrine of Remembrance war memorial, one of the city’s best-known landmarks.

But Guy said the trustees of the shrine did not object to the proposal which he said was a A$600 million investment in the state economy that would create 300 jobs in construction and hospitality.

Architect Nonda Katsalidis said the tall, slender building which will have 646 apartments, a 288-room six-star hotel plus retail and office space, was designed to throw a spotlight on the city’s international identity.

“We don’t have an Opera House (like Sydney) but we have AFPa complex culture and all those ideas were thrown into this project,” Katsalidis told ABC radio.

“The hotel at the top is designed as a starburst. We took the inspiration from the stars on the Australian flag,” he added.

The world’s tallest building is Dubai’s Burj Khalifa at 828 metres high while Europe’s tallest skyscraper, the Shard in London, stands at 310 metres.

The current tallest residential building in the southern hemisphere is the Q1 tower on Queensland’s Gold Coast in Australia, which soars 323 metres to 71 storeys.

But Australia 108 could be trumped by South Africa’s Centurion Symbio City, a 447 metre tower to be built by 2018 near Pretoria. — AF

Posted by BnW NewsWire at 2:47 pm No comments: