Kg Tanduo will be closed, villagers to be relocated

Maybe this is the best way after all. 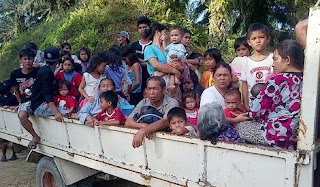 LAHAD DATU (March 27, 2013): The Malaysian security forces have decided that Kampung Tanduo, where the Sulu terrorists were first holed up after entering Sabah on Feb 9, will be permanently closed.
Sabah police commissioner Datuk Hamza Taib said the villagers, who currently taking shelter at an evacuation centre here, would be relocated to a new settlement which would be decided later.
He said the decision was made after the security forces found that the village, which was used as a fortress by the terrorists, was badly destroyed following the offensive launched on March 5.
"That is what has been decided so far, we will discuss the matter further, but as far as national security is concerned, it is only right that the residents of the village be relocated to a new place," he told a press conference at Felda Sahabat 16 operation base here today. He said the new settlement for the 12 families of residents, however, would not be far from Kampung Tanduo.
Hamza also said that the area of Kampung Tanduo was now free from terrorist threats and the police would convene a meeting with the National Security Council, Lahad Datu District Office and the village head to discuss the possibility to allow the villagers to return home before the relocation.
"The mopping up exercise is now being done in Tanjung Labian and Tanagian before entering the area of Sungai Bilis and we believe that it will be completed soon before we can allow the residents to return home," he said.
Earlier, Hamza said the security forces had seized a pistol, six live bullets and a machete left by the terrorists after the gun battle in Sungai Bilis early today.
He said in the 7.30am incident, the security personnel were carrying out the mopping up exercise in the area before coming across three terrorists who immediately fired at them and fled the scene when the personnel started to return fire. No casualties were reported, he added. –Bernama

Posted by BnW NewsWire at 2:32 pm No comments: