Apple is certainly in front again. 128GB of storage capacity to satiate your carving for more space. But I doubt this figure will stay long. 256 GB would be the norm sooner than you think. 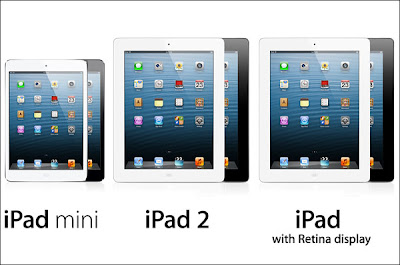 Apple's current and latest offering is the iPad with Retina display.

Reuters (29 Jan 2013) -- Apple Inc said on Tuesday that it will sell a version of its iPad tablet computer with 128 gigabytes of storage, which is twice the capacity of its existing models.

Apple, which has sold more than 120 million iPads so far, said that the new iPad will go on sale February 5, in black or white, for a suggested retail price of $799 (approx. RM2,459) for the iPad with just Wi-Fi model, and $929 (approx. RM2,859) for the version that also has a cellular wireless connection.

Posted by BnW NewsWire at 10:11 am No comments: