Sinar Harian
Posted by BnW NewsWire at 9:19 pm No comments: The government has been urged to implement mandatory caning and jail time for at least a year to those convicted of snatch theft.

Association president Kuan Chee Heng said current laws are too ‘soft’ and not very effective in deterring criminals from committing the crime.

He also urged that the current provision which states that those convicted 'can be' caned should be changed to 'will be' caned as a warning to criminals.

Currently, there are no specific laws for snatch thefts but those convicted will be charged under the Penal Code with stealing which does not involve violence.

For snatch thefts that involve violence, weapons or causing injury to the victim, those convicted will be charged with armed robbery.

Astro Awani
Posted by BnW NewsWire at 7:19 pm No comments: - Agency
Posted by BnW NewsWire at 6:03 pm No comments: The four-meter (13-foot) long siamese whales were dead when they were found in the Ojo de Liebre lagoon, which opens to the Pacific Ocean in the Baja California peninsula.

Officials from the National Natural Protected Areas Commission (CONANP) verified the discovery during a visit on Monday.

The nearly half-tonne creatures were linked at the waist, with two full heads and tail fins, said Benito Bermudez, a marine biologist and CONANP's regional manager.

He described the discovery as "exceptionally rare, without any precedent" in the region.

Scientists are examining the whales and plan to look for any other cases in the gray whale's natural sanctuaries off Baja California.

Every winter, hundreds of gray whales migrate from the Bering Sea to the warmer waters of Baja California, attracting tourists hoping to catch a glimpse of the animals.

3D Systems gets in the haptic mouse game 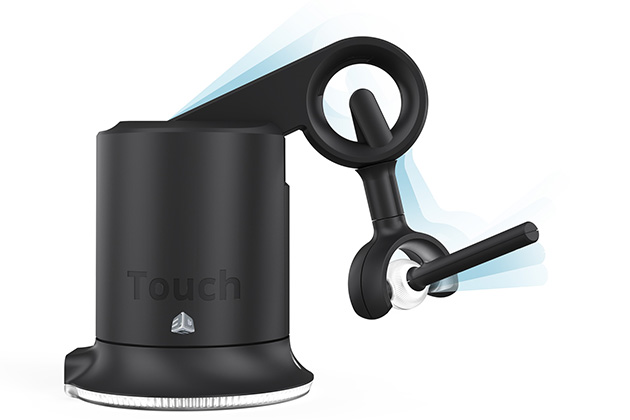 3D Systems is hitting this CES like a steamroller. A few months after releasing the Sense handheld 3D scanner, the company's offering up yet another peripheral for creating 3D models. This time out, the company's got a bit harder sell in the form of a 3D haptic mouse.

For starters, the functionality of such a device isn't quite so immediately clear as a product that creates 3D images with a wave of your hand. Also, there are already haptic mice on the market - though, like the scanner, the competition has chiefly been targeted toward professions.

And while (like the Sense), the price point here certainly isn't low enough to make this a mainstream product, it may well prove entice for a small cross section of the 3D modeling / printing community.

Of course the tool plays nicely with the company's recently announced Sculpt software, offering up haptic feedback to give the user the sensation of really creating something with a lump of virtual clay. In fact, the $500 asking price also includes a copy of Sculpt. 3D Systems' Touch is set to start shipping in Q2.

Source: Engadget
Posted by BnW NewsWire at 12:52 pm No comments: