Bolkiah (2nd left) receiving a memento from Pang after officiating and announcing the formation of the Pellet Association Malaysia.


TAWAU: Sabah is capable of producing around 30 million tonnes of wet oil palm biomass annually while a study has shown that it is also able to move up to 12.69 million tonnes of dry biomass matter for downstream use.

He said the production in Lahad Datu alone is equivalent to half of the biomass quantity that can be developed; that is until the National Biomass Strategy is able to transform the state into a biomass processing centre.

“The potential for biomass which at this moment is just thought of as waste or soil conditioner is estimated to produce additional income of RM15 billion annually for Sabah by 2020,” said Raymond during the Conference on New Business Opportunities in Biomass Downstream, where the text of his speech was presented by Assistant Minister of Industrial Development, Datuk Bolkiah Hj Ismail at Promenade Hotel here.

Raymond, who is also Minister of Industrial Development, attributed that failure was not an option for the state, and that there should be more effort in adding value to not just oil palm-based sources.

“I am talking about missed opportunities to explore in-depth into products that are cocoa- or timber-based, which we used to be more famous for even though it takes more time and effort to bear fruit,” he said.

He commented that since the world knows Sabah as a palm oil producer, it is necessary to explore more options into creating a variety of products to be developed.

“We have the confidence to make it work if all parties especially the private sector together with the state and federal government cooperate,” he said.

iPhone 5S will have no home button?

The next iPhone will make a landmark break from a physical home button, rumours suggest, as Apple calls time on a feature that’s been present since its first handset dropped back in 2007.

According to a report Taiwanese site Technews.tw, which was brought to wider attention by Cult of Mac, the iPhone 5S will drop a physical home button in favour of an on-screen capacitive presser.

It’s not known whether the change, which flies in the face of reports that the seventh-gen iPhone will differ little from the current model, is to allow Apple to equip the handset with a larger screen.

The site does disclose, however, that the new button will be coated in scratch-resistant sapphire crystal glass to make it more resistant to the kind of wear and tear that has caused problems with iPhones’ physical buttons in the past.

Apple purportedly also favours sapphire glass because it is compatible with optic sensors.

Industry consensus suggests that the iPhone 5S will land in September. The phone is set to be the first in which the iOS software that powers iPhones is helmed by hardware design hero Jonathan Ive.

Ive is expected to usher in a new iOS era marked by a 'flatter' look and feel and less in the way of cutesy skeuomorphic icons, whereby apps resemble real life objects – for example, the current Notes app that takes on the form of a notebook.


Via: uswitch
Posted by BnW NewsWire at 7:50 pm No comments:

Email ThisBlogThis!Share to TwitterShare to FacebookShare to Pinterest
Labels: Gadget and Techonology, iPhone 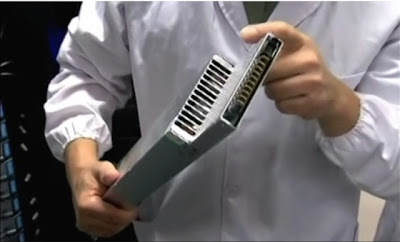 A Chinese university has built the world's fastest supercomputer, almost doubling the speed of the U.S. machine that previously claimed the top spot and underlining China's rise as a science and technology powerhouse.
The semiannual TOP500 listing of the world's fastest supercomputers released Monday says the Tianhe-2 developed by the National University of Defense Technology in central China's Changsha city is capable of sustained computing of 33.86 petaflops per second. That's the equivalent of 33,860 trillion calculations per second.
The Tianhe-2, which means Milky Way-2, knocks the U.S. Energy Department's Titan machine off the No. 1 spot. It achieved 17.59 petaflops per second.
Supercomputers are used for complex work such as modeling weather systems, simulating nuclear explosions and designing jetliners.
It's the second time a Chinese computer has been named the world's fastest. In November 2010, the Tianhe-2's predecessor, Tianhe-1A, had that honor before Japan's K computer overtook it a few months later on the TOP500 list, a ranking curated by three computer scientists at universities in the U.S. and Germany.
The Tianhe-2 shows how China is leveraging rapid economic growth and sharp increases in research spending to join the United States, Europe and Japan in the global technology elite.
"Most of the features of the system were developed in China, and they are only using Intel for the main compute part," TOP500 editor Jack Dongarra, who toured the Tianhe-2 facility in May, said in a news release. "That is, the interconnect, operating system, front-end processors and software are mainly Chinese."