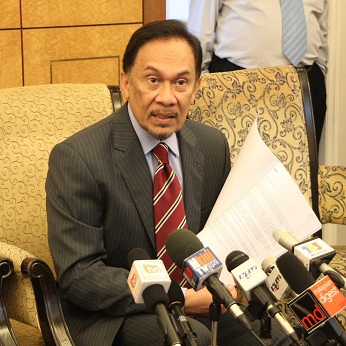 PETALING JAYA: Opposition Leader Datuk Seri Anwar Ibrahim has denied being the man in a series of pictures on the Internet showing two men groping and kissing each other.

The photos, which were put up on several blogs, were purportedly screen grabs of a video.

Approached by reporters after a dialogue session organised by the Anwar Ibrahim Club at One World Hotel here yesterday, Anwar said: “I have already said that I deny it. This is a disgusting political gimmick executed by Umno.”

Asked if he would take legal action against the bloggers, he said: “I don't know yet. I'll let my lawyer handle it.”

In the series of 14 black-and-white photos, a man resembling Anwar is seen kissing and hugging a man dressed in white.

There are also photos of the man shirtless and walking around nude in what appears to be a hotel room.

Although no other information was uploaded, there were implications that more were to come on the blogs.

This latest series of photos comes on the heels of a sex video of a man resembling the politician with a Chinese national.

Meanwhile, Umno Youth chief Khairy Jamaluddin said it was up to the people to judge for themselves if the man in the pictures was indeed Anwar.

“We leave it to the people to decide for themselves,” he told reporters after launching a smartphone app for Barisan Nasional cyberyouth here.

He added that Barisan should not be blamed or accused of having a hand in the matter.

“Do not blame us,” he said, declining to comment further.

Posted by BnW NewsWire at 11:45 am No comments: