Lakes that have been forming near Mount Everest could threaten settlements downstream if they overflow.

Ponds on the surface of the Khumbu glacier in the Himalayas have expanded and joined together to form larger bodies of water.

Climbers need to cross the glacier, including the treacherous Khumbu Icefall, to climb the mighty peak.

The accelerated meltdown of glaciers in the region is causing concern against a backdrop of rising global temperatures.

Scientists say the warning is the first of its kind for Khumbu, although other glaciers in the Himalayas have seen an increase in the number of lakes formed.

Such newly formed glacial lakes can overflow causing flooding, and with it loss of life and damage downstream.
Disintegrating glaciers

This is the first scientific team to visit the region after the devastating earthquake last April.

"A decade or so ago, there were individual ponds on the Khumbu glacier but in the past five years or so they have begun to get larger and join up," said Ann Rowan, who led the field study team from the universities of Sheffield and Leeds.

Dr Rowan's team has been studying the behaviour of debris-covered glaciers, focusing on Khumbu.

"Particularly, on the left hand side of the lower reaches of the glacier, there is a series of about seven or eight large ponds that are now starting to link and form a big chain," she told the BBC.

"There is water flowing from the upper part of the glacier through the series of these ponds and that is going to encourage them to join up.

"At present, the glacier appears to be disintegrating, and may form a few large and potentially hazardous lakes on the glacier surface." 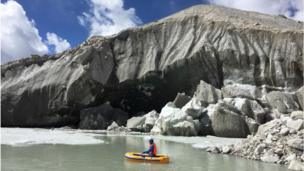 It is the first scientific expedition to assess the glacier since the earthquake in April. Image: C. Scott Watson, University of Leeds

Dr Rowan's team has studied satellite images of the Khumbu glacier dating back 15 years and has also conducted three ground surveys since 2009.

The scientists found that parts of the lower region of the debris-covered glacier have been shrinking because of loss of ice underneath. This has allowed the formation and expansion of water bodies.

The study says measurements for the past 15 years show that the surface of the debris-covered glacier has been declining at the rate of two metres per year.

Unlike the usually smooth-iced glaciers elsewhere, many in the Himalayan region are debris covered, meaning they are coated by a layer of sand, gravel and rock.

Scientists say since the upper parts of many Himalayan glaciers are losing ice mass due to rising temperatures. The supply of ice to the lower part of the glacier is therefore decreasing, causing the shrinkage.

"The surface lowering makes it difficult for the glacier to evacuate water from the surface past the large bounding moraines," said Lindsey Nicholson, from the University of Innsbruck.

"The level of the runoff stream that cuts across the terminal moraines sets a 'base level' for the glacier's internal water table and it seems that rapidly coalescing lakes are usually associated with this water table."

Hydrologist Jeffrey Kargel from the University of Arizona has been studying glacial lakes in the Himalayas for several years and said a pattern was developing.

"The worrisome thing is that if the process continues, then there will be a new glacial lake to worry about in a populated and heavily used valley," he said.

The Dig Tsho glacial lake in the Khumbu valley burst in 1985, destroying a hydropower plant and other infrastructure downstream.

According to the United Nations Environment Programme (Unep), there have been at least 35 events of glacial lake outbursts in Nepal, Pakistan, Bhutan and China over the past century.

Records show ponds developed and drained on the Khumbu glacier in the past too but scientists say the rising temperatures and accelerated meltdown of glaciers in recent years is causing concern.

"As the glacier continues to lower down, it gets more and more disconnected with the Khumbu Icefall, which means mountaineers could find it increasingly hard to climb," said Cameron Watson, a researcher with the Leeds University.

While some members of the Sherpa community that inhabits the Khumbu valley are concerned, others say they are not worried.

"We hear such alarmist reports every now and then," said Ang Kami Sherpa, the head of a Sherpa team known as ice fall doctors who fix the route on the Khumbu Icefall for climbers every year.

"The ponds will come and go but as long as we keep our gods on the mountains happy, we have nothing to fear."