Two months after its 2015 Frankfurt Motor Show premiere, the Ferrari 488 Spider has made its ASEAN debut – the regional launch for the droptop version of the 488 GTB took place in Phuket earlier today.

The Spider, which was first revealed in July, was introduced at the event in Thailand in its new Blu Corsa finish. Visually, the exterior lines generally mirror its coupe sibling, though there are some design differences brought about by the exclusion of the roof.

Flying buttresses replace the conventional pillars of the coupe, and there’s a new engine cover as result of the restyling. The latter features longitudinal ribs for a three-dimensional effect, and new sculpted mesh grilles help evacuate heat from the engine bay.

Despite the omission of a fixed roof, the 488 Spider has the same torsional rigidity and beam stiffness figures as the coupe, and compared to its predecessor, the 458 Spider, the new car – claimed by the maker to be its most aerodynamic spider ever – is equipped with a chassis that is said to be 23% stiffer.

The car features a RHT (retractable hard top), which weighs 25 kg less than an equivalent soft-top setup. The folding unit stows away in two overlapping sections, with the entire assembly sandwiched between the mid-mounted engine and the seats in a small cavity, occupying only 100 litres of space when folded.

The entire operation to retract or deploy the RHT takes 14 seconds, and it can be opened or closed at speeds of up to 45 km/h.

Also unique to the Spider is a small rear window that offers three stages of operation when the top is lowered to reduce wind buffering – the electrically-operated wind stop can also be lowered with the top in place to obtain a louder soundtrack. 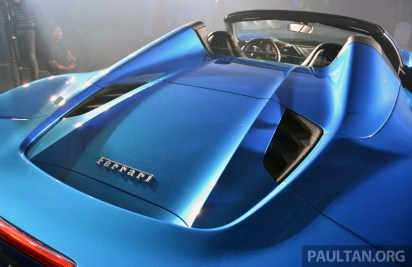 Like the coupe, the Spider is only available with a Getrag seven-speed dual-clutch F1 gearbox, which is based on that seen in the 458 but revised for use here with slightly longer ratios and Variable Torque Management. Upshifts are 30% faster while downshifts are 40% quicker than that on the Italia. Response times are touted to be nine percent faster than the 458 Spider.

Elsewhere, the architecture first seen on the 488 GTB gets carried over – driver assistance systems include a Side Slip Angle Control 2 (SSC2) system, which results in a 12% improvement in acceleration out of corners compared to the 458 Spider. There’s also E-Diff 3, F1-Trac as well as an ABS system with Ferrari Pre-Fill.

As standard, the 488 Spider comes equipped with a SCM 3 magnetorheological suspension control system and, like the coupe, rides on 20-inch wheels and staggered 245/35 front and 305/30 rear tyres.

The first Ferrari 488 Spider examples are set to begin arriving in the region sometime in the second quarter of next year (Malaysia, mid-year), and as you’d expect, Ferrari Far East says demand for the car has been high, with wait times now expected to be as long as that for the coupe.

Locally, a Naza Italia representative said that the entire allocation of the 488 GTB for 2016 has been spoken for, which means that of the Spider should soon follow suit (if it hasn’t already). Malaysian market pricing for the 488 Spider has yet to be finalised, but the indications are that it will command a 10% premium over its coupe sibling.

As an indicator, the 488 GTB was priced at an introductory RM1,068,800 (excluding import duty and options) when it made its local premiere in June, so the Spider should come in at close to the RM1.2 million mark sans duties and taxes. Like the coupe, it can be customised via the various trim options available in the automaker’s Tailor Made programme, adding to the final price.