Honda Malaysia has officially launched the facelifted Honda Accord – the refreshed D-segment sedan, which was first previewed locally last month, makes its debut exactly three years and three days to the date when the ninth-generation was first introduced in the country at the very same location.

The Accord facelift made its Thai debut in February, and we first saw it up close at the Bangkok Motor Show back in March. Like with the pre-facelift, the locally-assembled car is available in three variant forms – 2.0 VTi, 2.0 VTi-L and a range-topping 2.4 VTi-L. The Accord is mechanically unchanged, and revisions are left to the exterior and some new bits for the interior as well as additional kit.

Exterior changes are led by a new front end that now incorporates the automaker’s Solid Wing Face front end design, with a large chrome bar linking the headlights. The bumper has also been redesigned for a more aggressive look. At the rear, the Accord receives new LED tail lights with triple light guides and a wider chrome rear number plate garnish, and the rear valence has been reprofiled with a full-width chrome bar. Inside, the cabin layout and the double-screen centre stack profile is unchanged, but the trim has been revised, now combining wood grain and piano black/silver (on the 2.0 VTi-L and 2.4 VTi-L) that was seen on the Thai-market versions when the car was launched there earlier this year. The instrument panel has also been revised, with a new spindle pattern to help improve appearance and a new font for better legibility.

Changes abound with the i-MID and infotainment system. The 7.7-inch multi-info display and seven-inch touchscreen audio now comes with with Apple CarPlay compatibility (Android Auto when it comes along), MirrorLink, HDMI and WiFi hotspot. Unlike the Thai-spec car, there’s no Engine Remote Start – which allows one to start the engine and air-conditioning via the key fob – as seen on the new Civic. New halogen headlamps are to be found on the 2.0 litre models, while the 2.4 litre gets full-LED units that are reminiscent of those fitted to the Civic 1.5T Premium. All three variants also come equipped with new slimline LED fog lamps. The 2.4 VTi-L’s 18-inch wheels are the same design as before, but now feature a two-tone finish. As for upholstery, the 2.0 VTi comes with fabric seats, while the 2.0 VTi-L and 2.4 VTi-L’s are leather.

Safety-wise, all Accord facelift models now come with six airbags – previously only available on the 2.4 VTi-L – to go with the ABS with EBD and brake assist, Vehicle Stability Assist (VSA), Hill Start Assist (HSA) and rear ISOFIX child seat mounts that was already offered as standard. Another feature that was used to be reserved for the 2.4 VTi-L, the Honda LaneWatch blind-spot camera, is now fitted to the 2.0 VTi-L as well.

In a nutshell, here’s what’s on the cars: 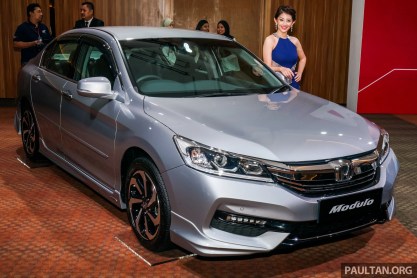 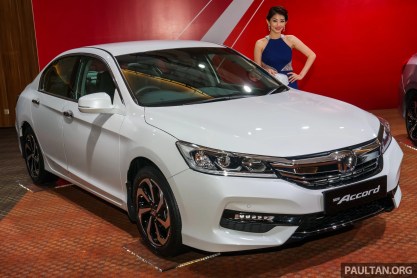 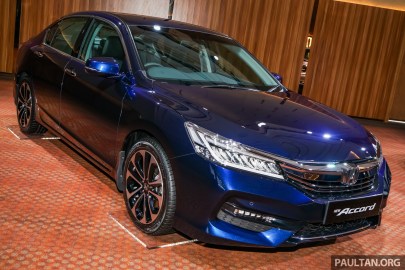 
Five colours are available for the facelifted Accord. New shades include Obsidian Blue Pearl, which was seen on the 2.4 litre preview mule last month, as well as White Orchid Pearl and Lunar Silver Metallic, the last of which happens to be the hero colour for the new Civic. The remaining two colours are the familiar Modern Steel Metallic and Crystal Black Pearl.

Additional dress-up equipment can be had, in the form of an Advance package (front/rear/side splitters, a trunk spoiler and puddle lights), and this is priced at RM5,500. A Premium Utility package adds on a trunk tray, trunk drawer, footwell lighting, illuminated side sills, door visors and door protector film, for RM2.930.

There’s also a variety of tint film packages, ranging from RM1,500 to RM2,800. Lastly, 2.0 VTi owners wishing to upgrade their basic rear-view mirror to an auto dimmer unit can do so, RM995.60 bagging you one.

Email ThisBlogThis!Share to TwitterShare to FacebookShare to Pinterest
Labels: car