We all want to make headlines, but not for the wrong reason!

Despite all this, I still love my country and hope it will make amend one day. Soon, I hope. 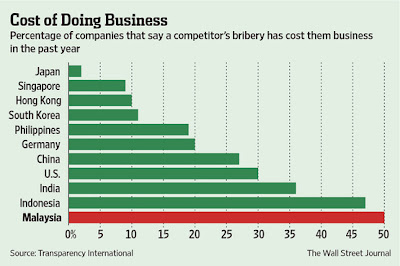 Despite Malaysia’s high-profile anticorruption crusade, half of the corporate executives surveyed by a global corruption watchdog believe that competitors have obtained business through bribery, underscoring the hard task ahead for Prime Minister Najib Razak‘s government in weeding out graft.

Transparency International said Malaysia scored worst in the 2012 Bribe Payers Survey. It asked about 3,000 executives from 30 countries whether they had lost a contract in the past year because competitors paid a bribe—and in Malaysia, 50% said yes. Second on the dubious honor roll was Mexico, at 48%.

A Transparency International survey suggests businesses in Malaysia must navigate a haze of corruption. Japan ranked as the world’s least-corrupt place to do business, with just 2% of respondents saying they had lost out due to bribery; Malaysia’s neighbor Singapore was second-cleanest, at 9%. Even Indonesia, with a long-standing reputation for corruption, fared better than more-developed Malaysia: Southeast Asia’s largest economy came in at 47%.

By comparison, 27% of respondents in China said they thought bribes had cost them business.

Email ThisBlogThis!Share to TwitterShare to FacebookShare to Pinterest
Labels: Biggest n Tallest, In the News